One of the worst adventure games ever made, is based on the classic horror film by Alfred Hitchcock... and by "based on" I mean that they both have the same title. In CE Forman's opinion (which I wholeheartedly agree with): "...this gets my personal vote for The all-time worst adventure game ever. Where oh where oh WHERE to begin? Well, for starters it's by Box Office Software, well-recognized in the industry for bringing lots of cheapies to market in the late 1980's. It's all CGA graphics. Bad CGA graphics, if that isn't redundant. Your character, a detective investigating a kidnapping at the Bates motel, looks like a monkey when viewed from the front. He holds his magnifying glass (or gun, once you find it) at arm's length constantly. The room descriptions are... well, let me just direct-quote a couple: "I found this is a big living room;" "I found this is the same big room." "Clues" you find along the way offer such helpful tips as, "Skeleton keys open doors, not skeletons." Exits are laid out so that at times it's practically impossible to tell which door leads where. Trying a locked door simply doesn't work until you find the right key, and gives no indication that it's locked. Nasties such as a dog, a ghost, and Norman's mother appear randomly and put you to sleep (!) when they catch you. There are bugs all over the game, the funniest being when you dig up a key in the coal bin. After you pick it up, it still shows up in the room, and you can keep taking it over and over and earning infinite points. And taking it repeatedly gives the message: "I found more keys just like the one I found before." Yes, they chose that as the alternative to adjusting the graphics so the key is no longer there. (I swear I am not making any of this up! Play it for yourself and see!) How this ever got published (in 1988, no less) is beyond me. An absolute must-play for all fans of truly terrible software. I mean it, if you can chortle at inept design, buggy coding, sloppy graphics and unbelievably dopey text, the belly-laughs this game will induce are more than worth [the small amount of time it will take to download it.]" Coaster, anyone? :) 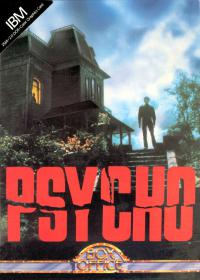 No comments have been posted about Psycho.