Review 1: Don't you love it when those mutated giant monsters destroy all those buildings? Didn't you ever think hey, this must be fun? This is your chance - take the role of George (aka King Kong), Lizzie (aka Godzilla) or Ralph (uuuuh... some kind of werewolf I guess) and destroy buildings and helicopters that are chasing you. You can even play with up to three players at the same time. Destructive and fun this one.

Review 2: Rampage is a decent PC conversion of Bally/Midway's popular arcade game. This is a side-scrolling action game for up to 3 players, in which you, mutated into a giant monster, have to trash one US city after the other. You can choose to be Ralph the Wolf, George the Big Ape, or Lizzie the Lizard. Playable, but not worth the name of the much superior arcade game. If you have never played the arcade version, you will find Rampage a fun game that's worth a few sittings, especially if you can find friends to play with. If you have seen the arcade original, though, you'll be sorely disappointed with this release.

Review 3: A hit game from 1986 introduces a strange arcade game in which you have to crush buildings while controlling one of the three beasts that look like a huge gorilla (King Kong type), a huge werewolf and a Godzilla. To destroy a building you have to punch it like a madman (madbeast) until it collapses. You will be interrupted by helicopters and building inhabitants while you are destroying the cities. The game has more than 300 levels so there's a lot to play...

Review 4: In Rampage you take on the roles of one of three huge monsters - an ape, a lizardman and a wolfman. The object of the game is to knock down all of the buildings on each level, but theres a catch. Not only are the other 2 monsters competing with you but the military has also been called in. So you will have tanks shooting at you from below and helicopters buzzing around your head. Luckily if take too much damage you can just reach inside someone's apartment window and um.. get yourself a snack ;) Lose too much energy and you will revert to human (nekkid) form and have to sidestep off screen, covering your shame (be careful though, because you just know one of those other big sods will just pick you up and pop you into their mouth. Rampage is a fun and addictive game, maybe lacking in depth but with a lot of replayability. Download it, it's good. 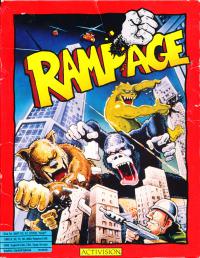 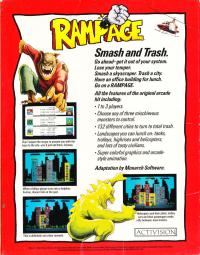 No comments have been posted about Rampage.