An okay conversion of Taito's lesser-known arcade game of the same name. There is not much more I can say about Renegade-- the game will be familiar to anyone who has spent numerous quarters on Double Dragon or earlier Bad Dudes: up to 2 players control 2 wannabe gangsters as they fight wave after wave of baddies. A Double Dragon clone in almost every respect, down to similar level design. Blocky graphics and limited moves makes it an inferior clone that is worth checking out for perhaps a few minutes, or just to watch the demo that shows some of the later (still boring) levels. That's it, really-- an average game in every sense of the word. 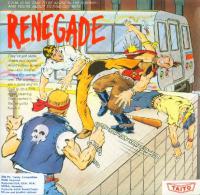 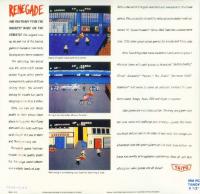 No comments have been posted about Renegade.