Review 1: Data East's RoboCop is a decent PC port of a fun coin-op game, not to be confused with OCEAN's horrible CGA port released earlier. -This release, while still pales besides the Amiga and Atari ST versions which are near-perfect conversions of the arcade original, is at least on par with many other Data East releases. There are some similarities with the OCEAN version, such as the fact that you only have 3 lives in the game, and extra lives are hard to come by. In all other respects, though, this Data East release is much more faithful to the arcade hit, meaning that it's a lot more fun to play. The controls are intuitive, although it's still difficult to shoot diagonally or evade enemy fire, and RoboCop has only a limited number of moves and weapons. These gripes are valid for the original coin-op version as well, however, and by and large don't detract much from the fun. In the absolute sense, RoboCop isn't Data East's best, but is definitely above average. And if you're a fan of the arcade original, *this* is the version you should play.

Review 2: Robocop, like Jungle Book, takes its name from its smash hit film. You play the role of ‘Murphy’, who was killed on duty by a vicious street gang. Although this doesn’t seem good, for OCP, the higher level police force in Detroit, it was a great opportunity to test out their latest ideas and turn them into a creation. Unfortunately for OCP their couldn’t completely wipe Robocop’s memory clean and now he is in search of his killers, for whom he wants his vengeance! One of the great things in the game are the weapons, you have a vast selection to choose from, which makes it great as certain weapons work better at certain times. If you’re a fan of the film this game is a must-try, as it goes practically step by step through the different scenes of the film, from the guys on the motor cycles, to the hostage scenes. Although to be completely honest, the graphics are nothing too look at, it’s a pity the PC version only came out in CGA, where as an EGA version would have been much more enjoyable. The arcade and even Amiga conversions were much better than the PC remake, which unfortunately, apart from die-hard fans of Robocop I don’t think very many people would play more than a few times. Also the control’s are really awkward, as they are the old base (Q,A,O,P) movements, which are not as good as the arrows in my opinion. None the less, this game is worth a try by all means. Download and enjoy! 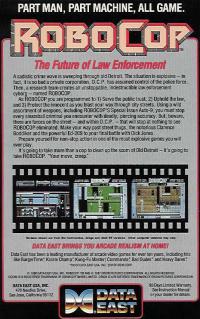 No comments have been posted about RoboCop.