Review 1: A very promising game when you first take a look at the well done intro and the first few screens you see in the game. But Siege simply fails to live up the first parts and is an average strategy in my opinion. Unlike other strategy games you can’t play the game as a campaign but you do have a ton of scenarios to select from though as well as the option to create your own scenarios or just edit some of the already made ones. When the game starts you can choose whether you want to play as the attacker or the defender. After that units can be moved around. As seen from the intro Siege is based in a fantasy world and there is a wide range of different units to choose from. Sadly there aren’t many differences between the units so it doesn’t matter much what units you decide to use. Overall Siege isn’t that hard to win in once you have finally figured out what the different options are and how you can control the different aspects in the game. Overall Siege is a poorly done strategy game with little to offer on the strategy side but good things to offer on the graphical side as well as the ideas the developers have tried to implement many good features and have succeeded with it as well. The two things that will probably ruin the game for many is the controls in the game which are quite confusing at the start and then somewhat weird computer level as it doesn’t seem to matter what level you want the computer to play at. But if you are a strategy fan and especially like a fantasy world seen in other strategy games like Fantasy General and Warlords it could be an interesting game to check out.

Review 2: Mindcraft's first tactical fantasy game Siege and the expansion pack Dogs of War is decent tactical combat game featuring tons of scenarios, units, and even a decent plot. In this cross between SSG's Warlords and EA's classic Rampart, your task is to either attack or defend a castle with fantasy units. Good VGA graphics and music unfortunately can't hide the fact that the AI of the game is simply horrible-- arguably even worst than Mindcraft's dreadful Tegel's Mercenaries. It is far too easy to outflank the computer and confuse its units by feigning attacks, and the only time you will feel anything resembling a real challenge is when the computer commands many more units than you do, to even out the odds. Gameplay mechanics is decent, although the cumbersome interface (like in most Mindcraft strategy games) really gets in the way. Although the game is real-time, you can pause it at any time to give commands. All in all, Siege is a fairly superficial tactical game that promises more than it delivers. Although there are many units you can buy, their difference simply boil down to whether or not they can conduct ranged attack or not. The lack of campaign mode is disappointing, but made up somewhat by a versatile scenario / map editor. Limited goals, gameplay, and bad AI makes this a good game only for beginners or anyone who likes easy strategy games. The rest of us would be more content playing SSG's Warlords or QQP's Conquered Kingdoms for the umpteenth time. If you want to give Mindcraft's engine a second try, play the much-improved Ambush at Sorinor instead.

Review 3: In this topdown viewed strategy game you have to besiege other castles. The grahics are very well made. You can make own scenrarios or play already existing scenarios. Before you start the game you can choose whether you want to defend or attack the castle. 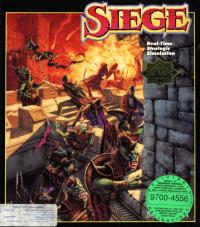 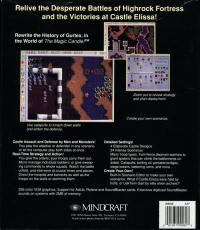 No comments have been posted about Siege.