One of my most favorite sci-fi text adventures, Starcross is yet another masterpiece from Infocom, this time one of their earliest sci-fi releases. In the game, you play a black-hole miner who is captured by a drifting alien vessel. Your task, similar to The Dig years later, is to figure out weird alien gadgets in order to find your way home. The game's hallmarks lie in top-notch writing and very well-designed puzzles. Alien artifacts and locations are described so vividly they spark your interest in exploration. Puzzles in the game are tough, but not unfair: they are more likely to provoke a "wow, that's neat" response once you figure out the solution, than a "how the heck can I ever think of that?" one. Starcross has some of the best puzzles ever designed, including two of my most favorites (the ray gun and force bubble puzzles). People with scientific background will find Starcross easier than those who don't, as many puzzles are related to scientific principles or gadgets. Many puzzles even have multiple/alternate solutions - a nice touch and no small programming feat in 1982. As one of Infocom's earliest games, the parser is limited and does not allow shortcuts that IF fans would consider indispensable. But the parser is still very powerful compared to other IF games in that period. If you don't find the parser in Zork I annoying, you won't find fault with the one in Starcross. The game's only weakness is the NPCs, who are not as well fleshed out as Infocom's other games. Your ship's computer is still amusing, though. Starcross is one of the best text adventures I have played. The only other "Expert" level sci-fi game from Infocom, it is not as difficult as Suspended (the other "Expert" game), but it is still very difficult. It is a good kind of difficult, though - a game that will captivate and challenge you for hours on end. It requires a lot of time and patience, but you will be well rewarded with an outstanding and unique adventure when you do. 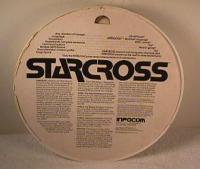 No comments have been posted about Starcross.