Review 1: One of my favorite racing sims. You start with a $700 and no car, so get one, prepare it for races and earn money. Buy better cars, race opponents, get more money...and defeat The King. Some little things make the game even better (such as car painting, tire changing, fueling...). Oh yes, the game covers the '60s, so there are no modern car models...only classics.

Review 2: Like building cars, painting them and/or just got a love for cars then Street Rod is the perfect game for you. You have to customize different cars including painthing them, engine setup and much more. Of course that is not all. You also have to reace the cars you work on. It's a great feeling when you have transformed a regular car into one hell of a racing car and then get the chance to race in it afterwards. And if that isn't enough there are several other nice features which makes you feel almost home in the garage when you work on the car. Finally the game offers a good deal of graphics and details considered the age of the game which is very well done by the developers. So if you stand the annoying beeping sound go give Street Rod a shot and I'm sure you won't stop playing it right away.

Review 3: The 1960s - the century of good music and beautiful cars. And it's up to you to acquire one of those beauties, tune it up and become the king of the road. You start of with only a few bucks - just enough to get a cheap car. Now get out on the street and win some races. You can bet your money or your car. As you don't have a lot of money in the beginning betting your car will probably be the best - but make sure you win! You can either do a road race or a drag race. The latter is easier - however having 4 gears helps a lot on a short track. Both aren't TOO hard though, although I strongly recommend using a joystick. You can win the drag race with the keyboard, but it will be a LOT more difficult to win the road race with the keys. I didn't even manage to complete the track... If you like building on your car (you can exchange a few parts...) and competing for fame and fortune then this is your game. The creators put a lot of efforts into the atmosphere of the game - it's nice. Original 60s feeling. Apart from that it cannot really be seen as a serious racing sim. It's fun though.

Review 4: Street Rod is California Dreams's masterpiece and one of the very best racing games ever made for the PC. What set the game apart from other racing games of the era (and even now) is the addition of gameworld: instead of letting you pick a car, then drive it in various tournaments, the game lets you live the life of a street rod lover in the '70s. Instead of winning the championship, your goal is beat the King and his black '63 Corvette. You can only afford an old car at the start, but as you win races, you will gradually be able to upgrade for better components and cars. The car customization screen in Street Rod is undoubtedly the game's best feature, and one that hasn't been duplicated successfully since. You can replace engine and transmission, chop your roof for that open-air look, and strip the bumpers. You can even change the decals and color to personalize your hot rod. After you find an opponent (from hanging out in front of a local fast food joint), the view shifts to a standard first-person view, with very good level of detail that rivals Accolade's Test Drive 1. You can drive a drag race or Mulholland race (along LA's famed scenic road of the same name), for money or with your car as the stake. The only "weak" point in the game, and this depends on personal preferences, is the fact that most races are very easy, and the King himself is not hard to beat. This obviously makes the game ideal for beginners, but experts will be able to finish it in a few sittings. The excellent customization options and solid gameplay more than make up for this, though, and make Street Rod one of the few racing games that you can play over and over again without getting bored. If you are a racing enthusiast looking for something different from your run-of-the-mill F1 games, Street Rod is a must-have.

Review 5: Street Rod 1 is the first in the series of California Games, its quite alot like Street Rod 2, but in some aspects its not as good, first of all, the choice of cars isn't exactly as good as in the sequel and also performance of the game seems a little less better. The plot of the game is quite simple, you buy used cars and race them for money or pink slips, the cars you are able to buy range in price and speed and reliability, the types of cars you can race are Bel-Air's, Vette's, Ford Fairlane's, Dodge Solara's, Oldsmobiles and T-Birds and the very impressive V8 Roadster. You also will be able to purchase used car parts also out of the newspaper's classifieds, you can buy spare parts such as new tyres, manifolds, engines, exhausts, carbies, mufflers, fuel injecters and tunnel rams. other things you can do to your purchased car is chop the roof and bumpers, and give it a new paint job, each will cost you a bit of money and prolly wont impact on the performance of the car too much. When you start the game, you start off with $750 bucks, which is just enough to buy you a 2 door Chevy, or a Fairlane, which is good enough to start off with and be able to win small amounts of money to build the car up into a bit of a speed machine, sell it and buy something faster and more reliable like the V8 Roadster or a Vette which is a couple of grand compared to the 800 or so bucks for the Chevy. The types of races available to race in are the drag race, which can be for $10, $50 or just for kicks, or road race which is for $20, $100 or for pink slips, which is getting the other guy's car if you win. When starting the game, you get the choice of ega/vga/cga/hercules/tandy graphics for graphics and adlib or normal for sound options, the only thing that could have been better about the game is maybe some good aussie cars, perhaps a Monaro! 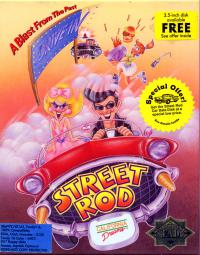 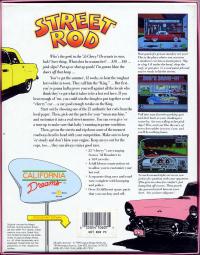 No comments have been posted about Street Rod.

Flight of the Ama...