Review 1: Stunts would have to be one of the best Abandonware racing games around, it has fantasic gameplay and some amusing racing opponents. There were a few different cars to choose from and they were all fun to drive but nothing beats flying around your tracks in the F1 car, wondering when you were going to slip off the track into the lake. The bit that gave Stunts the longevity over other games is the track making, you could make a basic oval for flat out speed or a track with loops and corkscrews. You could spend ages carefully making the perfect track, placing the trees and gas stations and then race on it with an computer opponent. This game is a must download, it's an Abandonware Classic in my opinion.

Review 2: Stunts (also called 4D Sports Driving) is a fun old game where you control a car going around a track, filled with loop, corkscrews and jumps. You can pick between different cars and tracks, and even make your own tracks. The game was made in 1990 and therefore the graphics are pretty bad, but the game plays very good. The racing is fun and fast, there are about 10 cars to choose from, each slightly different. There are several tracks included, but the real fun is making your own. The track editor is excellent for the time. It's simple to use and you can build everything that the normal tracks have, including loops, jumps, bridges, hills and even buildings to jump over. It is just drag and drop and there is no need for instructions. The racing is good, there are computer players to play against, but they aren't very good and there aren't any proper races and no objective to the game, but since you can build your own tracks, the lifespan is expanded. There are also contests for the best times, held across the Internet, which anyone can compete in. The graphics and sound are average for the time, and have quite dated. They are basic 3D graphics. There is a lot of popup and blocky graphics, and the sound is mainly beeps, but they aren't too bad, and at least the game only needs a 286 to run on. In conclusion, I would recommend this game. There are several similar games, but this is my personal favourite. Fun racing, great track editor, pretty small download. If you don't mind the graphics. Oh and also, it runs on Win XP.

Review 3: One of the best driving games ever made, period. Also known as 4D Sports Driving (European Mindscape release), Stunts is a fun 3D stunts racing simulator that comes with an outstanding track editor. For a great synopsis of what makes Stunts one of the best games in this century, here are some excerpts from GameBytes review: "In brief, Stunts is a stunt car racing game that has plenty of cars to drive, plenty of opponents to race (and beat), plenty of cliff hanging stunts to try, and thousands of hours of game playing excitement! Stunts is not a realistic racing simulator. If you want racing realism there are hordes of other titles out there to choose from. [Rather,] Stunts belongs to a distinct genre of games that include other titles such as Stunt Driver and Hard Drivin' II. All promise to offer similar features, but Stunts inevitably rates the best due simply to it's perfect controllability, which is sadly lacking in the other titles no matter how much configurability they try to provide. Stunts has a wide range to choose from, from the slow offroad 4WDs to turbo charged Formula 1 Racing Cars. Each car type has it's advantages and disadvantages. The 4WDs are slow as snails, but handle well on icy roads. The racing cars on the other hand are fast, but are not much fun to drive on icy roads (in fact, it's possible to out drag a F1 car in a 4WD on an icy road over a short distance!) You also have the option of driving a manual or automatic gearbox for each car. [The game] has two modes of racing. A "practice" mode where you race against the clock (no opponent), and a "competitive" mode where you race against a single opponent. There are a range of opponents all with their own various driving strengths. Sadly, the opponent intelligence is rather weak in general. The toughest opponent is called "Skid Vicious" -- a name to instill fear in would be challengers perhaps? His driving sure doesn't! In fact, all computer opponents share a high level of driving incompetence. They are slow, will reliably crash on any slightly tricky track, and if they don't, it is unbearably easy to "influence" them into doing so. BUT, the computer opponents can still provide a tough challenge if you don't mind racing them in a much slower car. It is the presence of the track editor and its operating simplicity that make Stunts a really great game. You can build tracks with three types of road surfaces, from a solid paved roads to slippery icy roads. There are a variety of "standard" road pieces, like corners, chicanes, crossroads, ramps, elevated roads, and banks. But the exciting part is the huge number of stunt pieces that you can include in your tracks. The range includes tunnels, loops, corkscrews, pipes, half pipes, "slalom" roads (roads with barricades that you have to "slalom" though), and corkscrew ramps. In addition there are a number of scenery pieces including buildings of various sizes, trees of various types, ships, and even a tennis court?! All these pieces can of course be combined together to make a vast variety of jumps and stunts. AND, if you ever tire of the set of provided landscapes for building your tracks on, Stunts also includes a terrain editor as part of it's track editor. To top it all off, Stunts also includes a 10 minute replay buffer (which is long enough for almost any race!). So when you complete that perfect drive, make an incredible recovery from a certain death situation, have a crash that is truly spectacular, or do anything that you want to take a second look at, it's preserved for you in the replay, which you can watch immediately, or save to disk for viewing later. Plus, for ultimate viewing scrutiny, the game provides a number of viewing cameras (for both viewing replays and racing from!), including a user controlled viewpoint! And of course, you are free to give your replays to your friends, so that they can see your incredible feats of driving." With great gameplay, literally thousands of hours replayability and endless track design possibilities, it's no surprise that Stunts remains popular over the years, and there are many fan sites on the Web as well as literally thousands of fan-made tracks. If you want to play only one fun enjoyable, but not necessarily realistic, driving game, Stunts is it. Note: For a scientific analysis (!) on the differences between Stunts and its European release 4D Sports Driving, read Alan Robinson's analysis, in which he proves beyond all doubt that Stunts 1.1 (the version on this site) is superior. Also, here's a neat undocumented feature in the game: press SHIFT+F1 to access terrain pieces in the track editor. 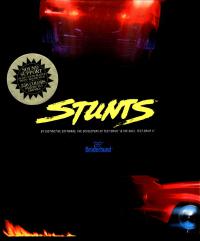 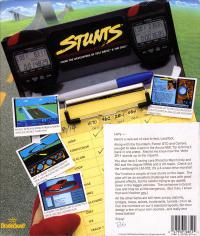 No comments have been posted about Stunts.