An early game by Titus, Titan is a fairly unorthodox Arkanoid / Breakout clone that unfortunately doesn't play as well as the concept would lead you to believe. The best way to describe Titan is to think of Blockout playing field stretched in all four directions, so that it becomes a two-dimensional playing field (with width and height) instead of one-dimensional (with only height). Instead of controlling a paddle at the bottom of the screen that bounces the ball up and down, in Titan you control a block that can move in any direction on the screen. Your task is to bounce the ball to knock off all the blocks in the playing field. This is much more frustrating than it sounds, because it is often difficult to determine which way the ball will go once you bump into it. The ball can also get stuck in a corner, in which case it's painfully difficult to knock it out. Overall, an original idea for a Blockout clone that doesn't play very well... unfortunately. 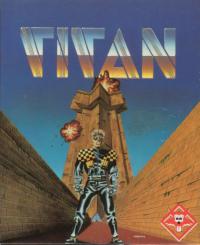 No comments have been posted about Titan.

The Horror of Ryl...