Review 1: One of the most original games ever. The C64 version of Wizball is definitely an all-time classic. Sadly the PC version is nearly unplayable on modern computers, even with a slowdown utility. The premise is as unique as the game: your brightly colored Wizworld is slowly turning drab, as all the color is sucked away by an evil force. With your trustly companion Cat, help restore color to your world by collecting paint drops stolen by enemies. You earn more special abilities the more paint drops you collect. Mark Macrae wrote an excellent review of this forgotten gem that I'd like to quote here, not least because it contains great description of gameplay... something that's very difficult to do given how unique the game is: "Wizworld is split into eight levels, stacked on top of each other like a giant sandwich, with level one at the bottom. To enable the Wiz to move and breathe more easily, he shrinks himself and steps inside a highly manoevrable ball - the Wizball. The screen scrolls as the Wiz negotiates the landscape in his strange, spherical vehicle. Only three adjacent levels can be accessed at any time - thus level four can only be accessed when level one is complete and so on. Wiz moves between levels through a series of tubes - arrows half hidden in the landscape indicating whether the tube leads up or down. Initially, moving the joystick left or right spins the ball causing it to bounce in that direction when it hits the ground. A pearl appears when a molecule or eight aliens have been shot and collecting this pearl highlights an icon at the top of the screen. A quick waggle of the joystick adds the highlighted feature to the Wiz's armoury. Zarks's sprites inhabit each level, some floating harmlessly, others spewing a deadly hail of bullets. Bubbles of colour also float around, bursting when shot and releasing a droplet of colour chemical. These droplets can be collected by Nifta the Cat, who appears when the corresponding icon has been lit and activated. Holding down the fire button transfers control to Nifta, allowing him to collect colour droplets and fill the respective mini-cauldron at the bottom of the screen. Depending on the target colour, a fourth cauldron fills up. Yellow is made by collecting red and green droplets of equal proportions for example. Collecting a grey droplet endows the Cat with 128 lives, wheras a black droplet makes the scenery go black - vision is restored by shooting a certain number of aliens. Catching a light blue droplet results in a 'Filth Raid' - sirens balring and blue lights flashing, six ships zoom in for the kill. A carelessly consumed purple droplet drives the cat insane, causing him to zip around the screen, miaowing with rage until he's killed. The white droplet gives an extra life. Levels are completed by collecting and mixing three missing colours. Completing a colour takes the Wiz to a bonus section set in outermost space. Aliens appear in formation, and shooting 255 of them gains an extra life. When the bonus is completed, or Wiz dies, he enters his Wizlab where his ball is left at a parking meter, the colour is put back into the landscape and a permanent weapon is selected. The aim is to complete all eight levels. This is one of the finest games written for the Commodore. The scenario and game design are so original that its almost off-putting at first. It only takes a short time to master the control of Wiz and his Cat, and then addiction sets in. There is so much to this game its unbelievable. Eight levels are really tough to finish. The Cat is a really nice touch, and a big part of the game is keeping him alive. The bonus section is also great fun, and I really like the nice touches like the police raids, and the level completion sequences. Wizball is one of the best-presented, most graphically and aurally attractive and addictive games available." A must-have!

Review 2: Wizball is one of the more popular C64 games. As weird as it may sound, you play as a huge firing ball! You're actually a wizard who's trying to bring peace to his land, but to achieve that he has to go through 8 levels, fighting whoever he encounters. A pretty original and interesting concept of controlling a huge ball as it bounces and fires at enemies it sees. 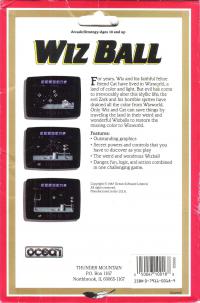 No comments have been posted about Wizball.