WWF: European Rampage Tour Review 1: I never liked WWF much so the rating might be too harsh for some of you. Anyway, the usual wrestling-fighting game with a rather hard controls and not so good graphics. Control one or two fighters (in two player mode) and beat your opponents. Easy and...well, not so good.

Review 2: One of the worst games ever made, WWF European Rampage is dull, repetitive, and even looks horrible. The entirety of gameplay consists of walking up to your opponent and hitting the fire button to punch him a few times until he falls down, and then stompimg on him a bit, continuing until his energy is sufficiently low for you to flop down on top of him and pin him down for three seconds, winning you the match. Although this might sound like what wrestling is all about, fans of the sport will wince at the total lack of strategy or even challenge in this game. Granted, the game does try to offer gameplay options. Unfortunately, the tag-team mode serves only to drag each bout out for twice as long (if your opponent escapes to his corner, he can tag his partner, who then comes in with a full energy bar, forcing you to start the whole tedious process over again), and the more complicated moves are both awkward to execute and totally unnecessary. You get a strictly limited selection of WWF wrestlers to choose your characters from (four, to be exact), many of whom are hopelessly out of date, and none of whom boast any of their real-life trademark moves or characteristics. The atmosphere-building insult-trading section of the first game (WWF Wrestlemania) has gone, and there's none of the showbiz razzamatazz that's the real secret of WWF's success as a spectator event. The 'tour' aspect of the game consists of repeating the same three bouts (you always have to fight The Nasty Boys, The Natural Disasters and the Legion Of Doom) in 'different' European venues which are actually exactly the same crude arena with different flags and banners each time, which means the game totally lacks any compulsion to play on to the finish. And in a departure from a common bad-game trend of spiffy graphics that try to mask horrendous gameplay, the graphics in WWF European Rampage is downright horrible. The players are all very blocky, and their movements resemble broken robots than human beings. All in all, I can't think of any reason anyone would want to play this game, although I'm sure that there are many WWF fanatics who will play anything with the WWF logo on it. It's even more amazing to think that WWF European Rampage is even worse than OCEAN's first WWF licensed game, WWF Wrestlemania, which surprisingly sold quite well (perhaps proving my theory about how fanatical WWF fans can be). If you want a good wrestling game, Micro League Wrestling 2 is a much better choice. 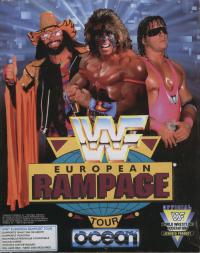 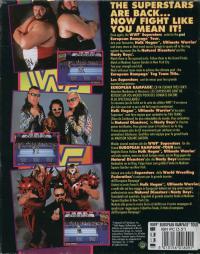 No comments have been posted about Wwf European Rampage Tour.