Xenocide is a fun sci-fi action game that offers different types of gameplay, from first-person shooter to platformer to overhead action. This PC version is much more obscure than the Apple IIGS version for which the game was first created, but it’s still quite enjoyable. The review at The Apple IIGS Gaming Memory Fairway says it all about what makes this a unique and enjoyable romp: ”Xenocide has a basic premise: kill the aliens that have infested the moons of the planet Talos IV before they spread to the surface of the planet. The logical way to do this? Completely destroy the orbiting moons! How to do this? You must first travel to the surface of the planet in a hovering assault craft (don't let the aliens mess up your windshield!) shooting aliens and dodging rocks along the way. You must also pick up canisters, which are very important, because they are what you will store your ammunition in for the following levels. Control includes keypad or joystick with open apple being the fire button and option being the missile launcher and space will throw off a nuclear bomb which will destroy any aliens (including canisters however) ahead of you. Assuming you haven't been blown up, or run out of fuel by the time you reach the outpost station you'll then proceed to the second level of a planet. The game now takes the view of 3rd person instead of 1st person perspective, the classic side shooter. The object on this level is to collect 5 bombs located throughout and get to the next level. Fire button shoots lasers. Option shoots grenades. Along the way, you will find pulsating spheres - these will allow you toggle between the options given in the lower middle right of the screen to increase fire power or recharge shields. Space bar selects what is currently toggled to. Keep an eye on the fuel gauge! Next level is very similar to the last, except that you're now underwater, need to keep an eye on your oxygen and have to find keys instead of bombs to allow entry to the next level. The 4th part of the game involves a top down view like Gauntlet, and you are required to place the 5 bombs into the nuclear reactors. Then find the teleporter controls, activate them and hop in the teleporter. Do all this 3 times, and you've finished the game! :-) Having different modes of gameplay is something of a rarity these days mainly because game developers are interested in releasing something that doesn't require a lot of effort to produce. Different modes of play increase challenge and take the player longer to master the game, which IS a good thing! ;-)” 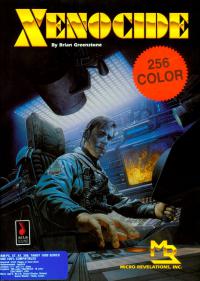 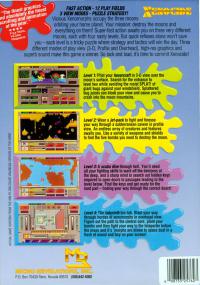 No comments have been posted about Xenocide.