Review 1: This game is based on the famous fantasy board game. Blood Bowl is another version of American football. All though there are a few differences. Instead of normal human players you can also use orcs, skeletons, elves, dwarves, halflings, dark elves and other races. It's allowed to attack the other players (and even kill if necessary). Other than that it's pretty much like normal American football where you have to get the ball down on the opposite's goal line. The controls in the game is a bit hard to get use to, but once you know them it gets easier. The graphics are ok and the sound as well. The developers of this game have managed to turn the board game into a very good PC game.

Review 2: This is a faithful adaptation of Games Workshop's board game of the same name. Being probably the only turn-based fantasy football game (think D&D meets Monday Night Football), Blood Bowl is unique. The rules of the board game are implemented well; it is a complex turn-based tactical sport simulation with many nuances, and you must plan every move carefully. The game itself is a lot of fun, especially because the players-- being fantasy creatures-- often have special powers or traits that you can put to good use. Unfortunately, the murky graphics and confusing interface mar the solid game engine. The AI could also use improvements, but overall, it's still a commendable effort that is great for fans of the board game who cannot find friends to play against. 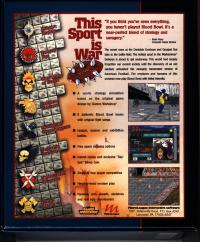 No comments have been posted about Blood Bowl.