Review 1: A strange mix of strategy and city building game. Caesar puts You in role of a Roman province governor with many goals: build a province capital, fight the natives and, of course, try to get rich! It had such a success that a game giant Sierra simply had to purchase not only the license for the game, but the whole Impressions software company itself!

Review 2: Caesar is another version of Sim City - well almost. The developers aren't the same as with Sim City but the general gameplay is in many ways similar to Sim City. You start the game by having a complete empty area. It's then your job to build up your own city and attempt to run it while you build it up. There are enough challenges including little food for your citizens and also foreign people attacking your city. You can build many different buildings including barracks, arenas, houses, farms, towers and even an aqueduct. Of course you can't just build unlimited buildings, as you have to pay for every building, which is of course only logic to common people. While you can use a lot of time building all these things and placing roads and much more I feel something is missing in the game. Although it is the same in Sim City I don't feel the same is offered in Caesar so after the initial "building up" phase you gave very little to do which is causing the game to get boring. Caesar does offer a great interface and it's very easy to learn and place the first buildings. The graphics are acceptable as well and you don't have any problems recognizing what building is what despite the somewhat small unit for each building so the graphics designers have done well here. Because of the nature of the game so sound is really included but it doesn't matter much either since it's clearly that it's the gameplay that has received most of the attention. Overall a well-done game but it quickly gets boring, as there aren't many different things to do in the game.

Review 3: Try to think of Sim City set in the roman empire and you get the basic idea of this game. Build up your city from various parts and govern it. Unlike the peaceful (and sometimes boring) concept of Sim City you have to play different here as you have to be able to defend yourself against your neighbors. Nothing kills the joy of the proud roman mayor (you) faster than the message "barbarians enter your city" - too late, should have thought about some nice City Walls a bit earlier I'd say. Overall this one's become a classic and it's sure worth a try.

Review 4: After years of false starts and misdirected attention with its flawed "Micro Miniatures" series, Impressions finally found their true calling in Caesar, a great city and empire management game that can aptly be labeled Sim City in Rome. You will begin as a low ranking Roman bureaucrat, and must work your way up towards the final goal of --what else-- the Emperor's throne. You will be given control of a pristine Roman province, which you must develop into a thriving metropolis to gain promotion to other provinces that are progressively larger and more difficult to rule. Promotion requirements for each province encompass military might (i.e. successful defense of the province against enemy attacks), as well as economic and social goals (e.g. population happiness and health). What makes Caesar a lot of fun to play is its tongue-in-cheek inclusion of Roman culture and mythos. You can hope for divine favor buy building temples, and build the coliseums to please the people. Historical elements also strike a good balance between playability and realism: you need to build baths for health-conscious populace, foster industrial growth by trading with neighboring provinces and encourage industries with natural advantages (e.g. wine in Southern Italy). In a novel twist to typical wargame design, the game can even be interlocked with Impressions' Cohort II to give you greater control over tactical battles. Caesar is the game that finally puts Impressions' name on the map of quality strategy game companies to watch for, although it was still quite underrated in its days due to poor distribution and lack of fanfare. Best of all, Impressions has decided to give away the game for free, to cheers of all fans, although unfortunately the manual isn't up for download (you can get it here, however).

Review 5: You start off as the Governor of a province of the Roman Empire and your ultimate goal is to become Caesar! To rise to this, you need to build cities, trade with neighbouring provinces, protect your province from your enemies and conduct a number of other interesting tasks. In the game you have advisors to help you out along the way and your success is monitored in four different areas, Peace, Culture, Prosperity and Empire. If you are good enough you will become Caesar and rule the whole of the Roman Empire. Overall this is a great strategy and empire building game and is a must for any fan of the genre. But even if you’re not a ‘fan’ as such I would still recommend you give it a try.

Effect: umlimited money
When:when in caeser directry
How:go in the directry called c3model then go to the word dig and put it to a minus number eg-1000 the every time you clear land you will get 1000denari 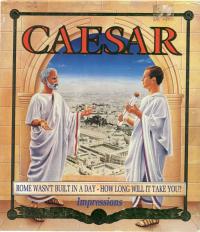 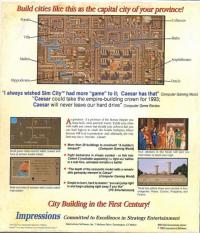 No comments have been posted about Caesar.