Endorsed by Hall of Famer Quarterback Joe Montana, (JMF) was one of the first SEGA football games, released back in 1990. This company is known for manking great sports games -- but ten years ago, the PC ports of games was often inferior to the console versions, and JMF is no exception. First, the game seems incompatible with modern sound card settings, so I was forced to play it with no sound, reducing the experience. From the main menu, you can play a exhibition game, a league game, or practice plays or field goals. Two people can play, on both ends of the keyboard, and joysticks are supported -- but not a mouse, which is another downside. When playing a league game, you decide which team that you want to 'buy' to coach (otherwise all you can do is simulate results), and then when each game starts decide the length of the game. After picking your play, which are generic and can be decided to be either run or pass, you then can choose which player out of several that you want to control. You can control the QB, for example, and then throw the ball or hand it off, or you can play one of the wide recievers and try to catch the ball when it's thrown. Same thing goes for defense. There is also a seperate screen for field goals and extra points, and when touchdowns, extra points, or interceptions are records, small animations come on the screen. In addition, a play by play recording of the game, and parts of the game can be saved as a 'highlight' to view later. You can also save the game and come back to it at any time, options that would be seen in later football games as well. Give credit to SEGA for making one of the first computer football games with graphics -- although crude even by 1990 standards and not looking like VGA at all -- and for making a game that does feel like a football game. However, there are many problems with the game. The team listing is accurate, but there are no actual players. There is no choice of difficulty levels and the computer AI seems easy. While you can't use the same play over and over again, it doesn't take much to keep it off balance, and its easy to disrupt their offense with your defense. The AI of your teammates is not the greatest either, and kicks are VERY hard to make for field goals and extra points. The play book is small and rather limited, the options available for your players is small -- jump, block, and run faster was all I could find -- and there are NO coaching or manager options at all. You can rearrange your roster around but can not acquire new players, nor can you make any players or teams, although you can have more then one league saved. The most serious knock on JMF was how easy it was for me to win. For example, when I chose to play New England, which was AWFUL in 1990, and played against the 49ers, a good team back then, the score was 28-0 in my favor by the end of the first quarter! The lowly Patriots should not have been able to run roughshod over the 49ers back then. Similar games of bad teams playing good teams resulted in similar situations. I know some of you are saying that there is nothing wrong with that, and you're right -- if you're not looking for a realistic football game. In summary, JMF is an okay early football game, but not very realistic or detailed, and soon surpassed by better football games such as the Madden series. It's fun to try out if you're a football fan, but people who don't know football or have never tried a football game before would not be advised to play this. Even football fans, unless they are playing another human, will probably soon become bored with this dated and limited option game. 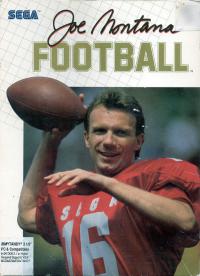 No comments have been posted about Joe Montana Football.