One of the earliest baseball games ever made for PC, Spinnaker's Major League Manager manages to convey both the excitement of the sport and the coaching challenge with nothing but text and ASCII characters. Similar to EA's Radio Baseball, MLM lets you coach your favorite team and decide strategies on the diamond with reasonably realistic statistics and gameplay options. One feature that's worth noting is that in addition to current teams in the National and American leagues (this version is 4.0, with official statistics for the 1990 season), you can also play "Old-Timers League," managing historical greats such as the 1975 Red Sox or the 1927 Yankees. The statistics are not as comprehensive as the likes of Diamond Dreams Baseball, but for a game designed for beginners and casual fans with official stats and even historical teams, MLM offers enough to hold fans' interest for a while. 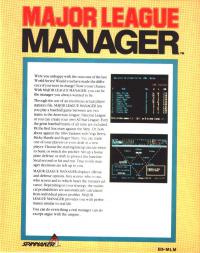 No comments have been posted about Major League Manager.