Pro League Baseball is an excellent text-based baseball simulation from Micro Sports. Officially endorsed by USA's Major League Baseball, the game features full rosters for the 1991 season, as well as all the standard features one would expect to find in a detailed baseball simulation. This means league play, team management, detailed statistics, drafts, trades, and accurately modeled stadiums. The game even has a nice download function for annual updates, although Micro Sports soon abandoned this function, requiring people to instead buy new games to use newer rosters. Although much more focused on accurate simulation than on bells & whistles, Pro League Baseball does not neglect this department. To enliven the static, spreadsheet-y look of most screens, the game uses RealSound audio technology (same as Access' early games) that enables digitized speech to be played from standard PC speakers. This is used as a running commentary that accompanies text description of what is going on during matches. With my limited baseball knowledge, I cannot really vouch for the realism of the simulation, but I have heard many good things from baseball fans about the game. The designers' other sports game NFL Pro League Football was actually used by a number of publications to predict Super Bowl winner, so that should give you an indication of what to expect here ;) Recommended! 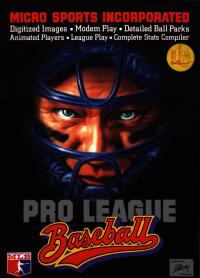 No comments have been posted about Pro-League Baseball.

Where in the Worl...