About Times of Lore

Review 1: The same kind of roleplay game as the famous Ultima series. The graphics are very good and reminds a lot of especially Ultima 5 and 6. The game offers a great story and you play it through with a choice of three different kind of characters. Other than that the game reminds a lot of Ultima and both the game interface and a few of the other features are the same. This game is quite good and really worth a download.

Review 2: A good old style RPG in top-down view with an intense atmosphere and beatiful EGA graphics that looks better than many many VGA graphics I have seen. You play a young adventurer (either a knight, a valkyrie or a barbarian) in a fantasy land that is in disorder. The beloved king is dead and noone was able to take his place. In these chaotic times you fulfill quests always ready to be attacked since the land has become unsafe - you're not even safe in the villages. Potions and spells you find on your way make surviving easier - people you meet may have valuable advice to give. Overall the game's concept reminds very much of the earlier Ultimas while providing better graphics and an atmosphere you only get in the later games of the legendary series. Fans of this kind of RPG will love the game and others might at least want to have a look at this nice little piece od fantasy roleplay gaming.

Review 3: Perhaps best described as "light Ultima", Times of Lore is a pleasant RPG set in the land of Albareth. You play either a Knight, a Barbarian, or a Valkyrie on a quest to search for the magical artifacts that will restore High King Valwyn to power. The game is played in real-time, with adventure-style interface (Use, Talk, Drop, Equip etc.) similar to the Ultima series. Overall, it's a fun, short RPG that's not innovative in any way, but it does everything well and is a fun diversion from "heavy" RPGs, and does a much better job at introducing RPG newbies to the genre than the overly simplified Tangled Tales which was based on the same engine. 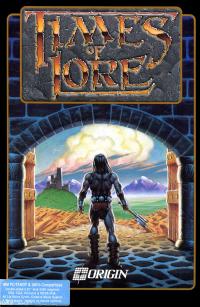 No comments have been posted about Times of Lore.