One of the best sport simulations ever made, Bethesda's Wayne Gretzky Hockey is a classic hockey game that has it all: knuckle-blistering action in the rink, coaching options, great graphics (for its time), and even the fights. Even to this day, WGH remains one of the most realistic hockey sims ever made. The list of innovations and features is endless: ability to create new teams and players, four difficulty levels, excellent mouse or joystick controls, ability to play in coaching mode only, and even digitaized video fight scenes :) You can choose tactics from a variety of lines, power plays, and penalty killing options. For the first time, computer player actually poses a challenge: they'll take advantage of breakaways, act less aggressively when they are leading, and uses very logical tactics in general. And for the first time, player statistics do matter: players with high "aggression" score will tend to get in fights more often, and those with high "skating" score will skate faster and are better able to avoid the opponents. WGH is simply a must-have for all hockey fans. It may look and play dated by today's 3D-accelerated standards, but try it out-- you'll be surprised at how well this decade-old game stands the test of time. The only downside is that graphics (top-down perspective) could be better and the videos less pixellated. Still, that's a very minor gripe. Highly recommended, and be sure to check out the superior sequels WGH2 and 3. 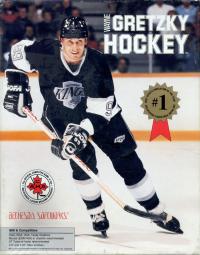 No comments have been posted about Wayne Gretzky Hockey.